Tim Donnelly is running for Congress and he is the one real choice. Vote for Tim on March 3, 2020 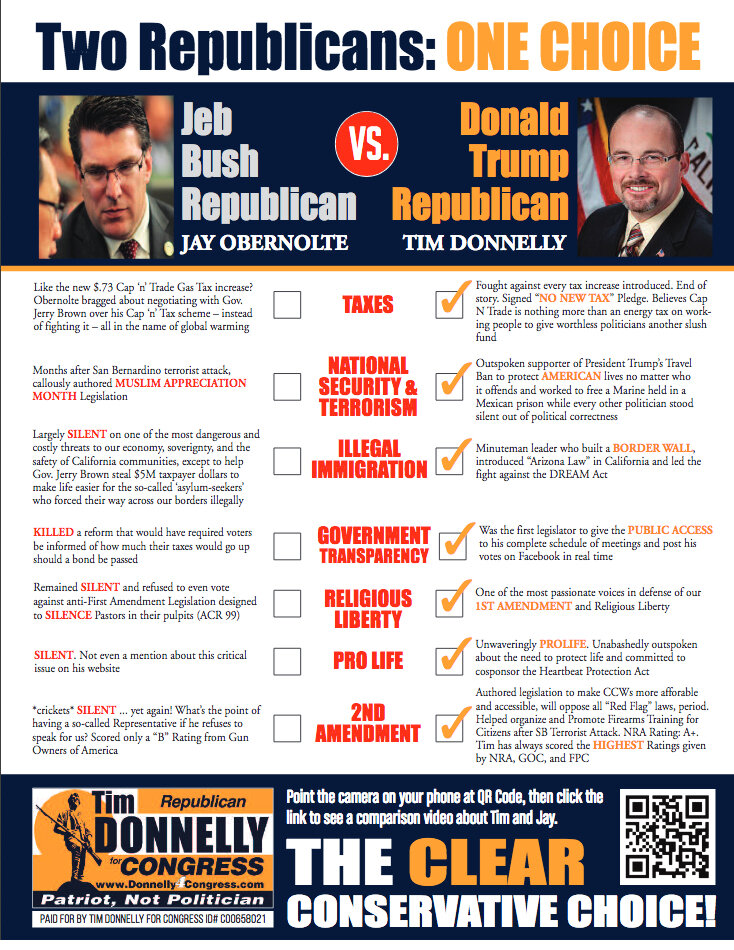 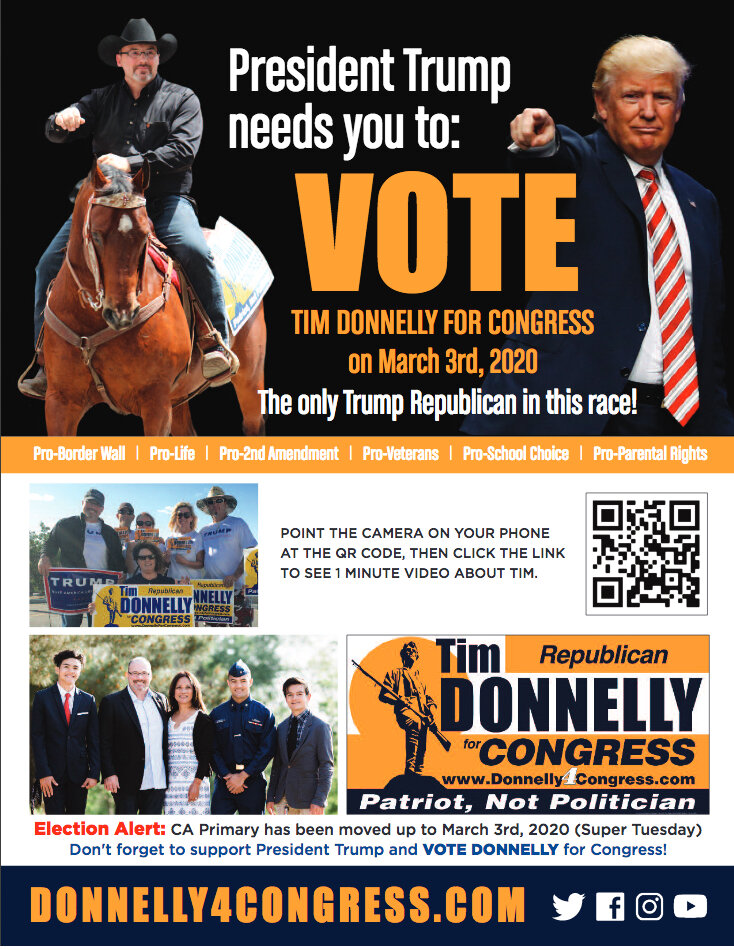 According to numerous independent sources, Jay Obernolte was the secret architect on the very controversial Cap n Trade Deal Republicans made with then Gov. Jerry Brown in 2017 which resulted in a new $.73 tax on each gallon of gasoline.

While Obernolte did vote publicly against (Assembly Bill 398) on the Assembly floor, he is rumored to have privately negotiated the entire deal! He claims that he quit the negotiations when he didn't like the direction it was taking, but one thing is clear:

Obernolte never went public with any of the concerns he later claimed to have, before the deal was finalized—only afterwards when it was too late to matter [Source].

It is unclear at what point he abandoned the negotiations with Gov. Brown—if in fact he did at all. Obernolte's signatory legislation—the suspension of the 'Fire Tax', a $115/year levy on all of CA's rural districts—is what Gov. Brown offered in exchange for a new $.73 gas tax that is estimated to cost every working Californian close to $600 every year.

Obernolte made the mistake of bragging about it publicly at a Republican Women's event in front of some very well-informed women, and then back-pedaled, and denied it.

On July 26th, 2017 Obernolte admits to being part of the Republican Working Group (with Chad Mayes) that got ball rolling on a Deal on Cap n Trade: 73 Cap n Trade:

“Today, we proved that Sacramento can rise above the partisan fray of our country to do right for all Californians,” Assembly Republican Leader Chad Mayes, who supported the cap-and-trade extension, said in a statement following the bill’s passage, calling the fire fee’s repeal “a victory for rural Californians.”

Yet Obernolte, who participated in a Republican working group leading up to the vote — which produced a document of what a GOP-led cap and trade would look like — ultimately felt as if too many Republican principles were omitted from the final plan.

In September of 2017, shortly after the vote took place on AB 398 to extend Cap n Trade through the year 2030, Assemblywoman Melissa Melendez called me and told me personally that Obernolte led the negotiations and was the 'architect' the deal, and then publicly voted against it for political cover. She told me that when they came back into the Caucus room after the vote, everyone who'd been involved in working out the details of the deal were shocked and deeply upset at Jay for voting against the deal he'd helped craft.

According to Melendez, there was a strong sense of betrayal among the Swamp 8 who went out and voted for it. At the time, Melissa refused to go on record, but Breitbart editor Joel Pollak let me make reference to Obernolte's Rumored Role [Source].

In the end, Melendez was sent to the dog house (the Assembly's smallest office) as punishment for speaking up, and Obernolte and many of the Swamp 8 were rewarded with leadership roles:

Dahle also rewarded a third “Swamp 8” member, Heath Flora, representing the San Joaquin Valley, by naming him an assistant Republican leader.Most of the other leadership picks aren’t likely to set off any alarms with conservatives, such as Escondido’s Marie Waldron, Republican floor leader; Frank Bigelow, who hails from a rural district, deputy Republican leader; and Bakersfield’s Phillip Chen as yet another assistant Republican leader.However, the appointment of Jay Obernolte (R-Big Bear Lake) to caucus chair.Obernolte is rumored to have been a key negotiator for the cap-and-trade deal with the governor, but pulled his vote at the last moment without informing any of his “Swamp 8” colleagues, according to an unnamed source within the caucus.

When confronted at the Tea Party Debate on Nov 7th 2019, Obernolte claimed that he was 'just trying to protect taxpayers' by creating the original framework for the deal that ultimately raised gas taxes by $.73 on every gallon. Obernolte said, "Cap n Trade is a 'good thing' because it's a market-based system. At a recent Candidate Forum in Mammoth Lakes, in front of all Democrats, Obernolte expressed his profound belief in the 'science' behind the theory of man-made Global Warming, and thinks Government should 'do something' about it.

Now, Obernolte claims he led the effort to oust Chad Mayes as leader, even though up until this past month, he included Chad Mayes endorsement proudly on this website. You can't have it both ways. I’m not the only one who was privy this inside information about Jay's greater involvement in the secret negotiations. About three months ago I got a call from Washington DC from a major PAC called Club for Growth. They told me verbatim everything I already knew about Jay’s role in the $.73 gas tax increase they further said that was the reason they would not be backing him, and wanted to know if I would consider running for the open 8th Congressional Seat! 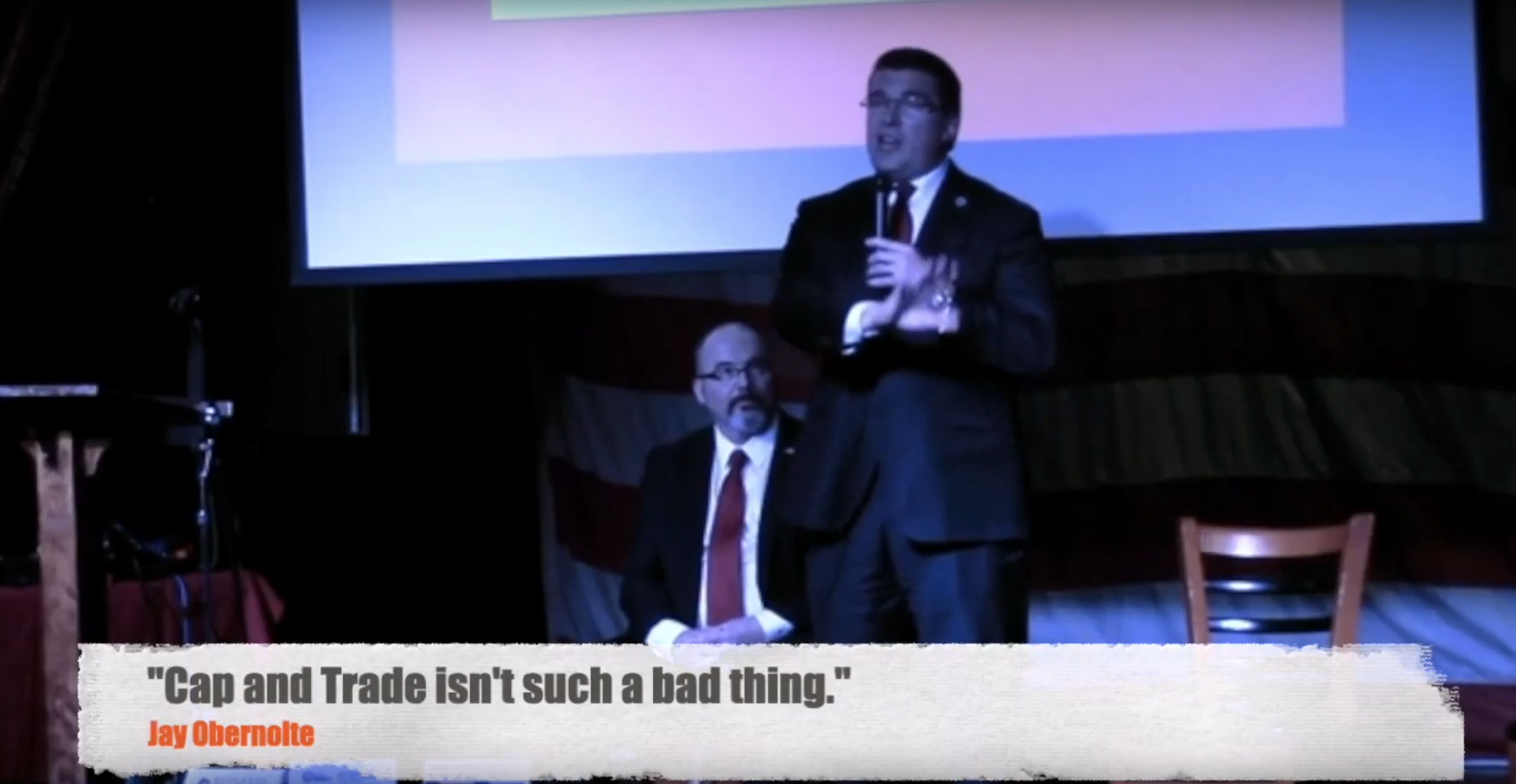 To Give Gov. Jerry Brown $5M of Taxpayer money to make illegal aliens more comfortable in California after they illegally crossed our border claiming to be 'Asylum Seekers'